Each cell needs to be individually monitored to protect them against over-current, over and under voltage, and estimating state of charge. That means I need 108 individual circuits, one wired to each cell in the pack. I decided to use the Elithion BMS (Lithiumate Pro) because it seemed to offer the most control.

The molded plastic tops of the Volt batteries prevent the typical BMS installation between the cells so I had to come up with an alternate method to physically secure the BMS circuit boards to the batteries. I will use the Chevy Volt's original BMS wiring harness to make the electrical connections to the individual cells.

The greenish-yellow plastic slices are for water cooling. Inside each are 3 pouch cells in parallel. You want to get these compressed again carefully. I fabricated new custom length bolts from a length of threaded rod. In order to fasten to the steel plates at either end of each module, the rod bolts have to be M6x1.0. Grainger Item# 25DL85 is $1.67 for a 3 foot length. I needed 12 of these (36 ft).


At left is the same module assembled (but before I cut the threaded rod to finish length). Below are three 48v modules bolted together.

I can't use the Chevy Volt batteries in that gigantic "T" -- I need to get them to fit into the existing spaces in the car. Not to mention the fact that I had to completely disassemble them in order to be able to lift them out of my truck. Removing the long, hardened steel bolts which held the modules together allows one to separate the modules from each other.


At left is a single 24v/45Ah module. There are two of these in the Chevy Volt pack.


A single 48v/45Ah module. There are seven of these in the pack.

In the pack there are seven (7) 48v modules and two (2) 24v modules. I purchased two additional 24v modules from an individual that wasn't going to use his entire pack. The reason will become clear later.

When you remove the bolts which hold the modules together, they expand, as shown below. 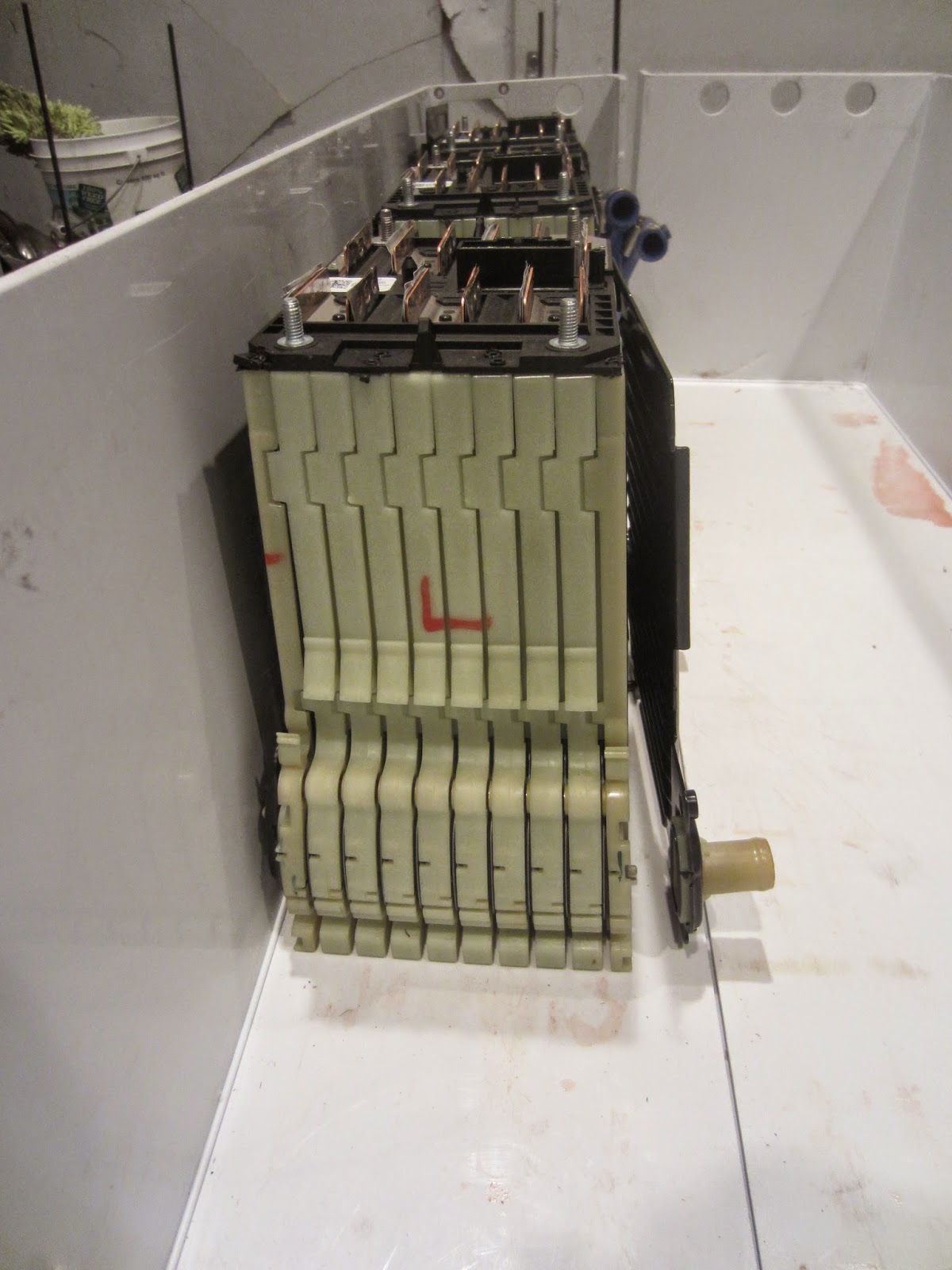 Ultimately there will be three 48v and four 24v modules in the rear box,

and in the front box therew will be four 48v modules.

I drove out to a salvage yard in Phoenix, AZ to pick up this Chevy Volt battery pack. Even factoring in fuel cost, I spent about one fifth the cost on these batteries.

Who Revived the Electric Car

At a party last weekend my friends Eric and Earl (both Leaf and Tesla owners, incidentally) gave me the idea of looking for batteries from a junked Nissan Leaf. What I ended up finding was that salvaged GM Chevy Volts were a little more common (and a little cheaper). The Volt carries 16kWh of energy in its 288 LiMn2O4 pouch cells. That's 384v / 45Ah. That's twice the voltage and half the capacity that I need. I could probably reconfigure the batteries in some series-parallel combination to get what I need. I'm not sure, but there's only one way to find out.

It was the summer of 2008 that I bought a 1972 Porsche 914 with the intent of converting it to a purely electric car. I drove it around as a regular gasoline car that summer and fall, while collecting the parts I needed to convert it to electric. Finally, in January 2009 I was ready. I advertised the internal combustion engine for sale and left it in the car until I had a buyer, so they could see it run. As soon as I had a buyer I pulled the engine and thus began the conversion process that very weekend.

I couldn't have done it without my helper: 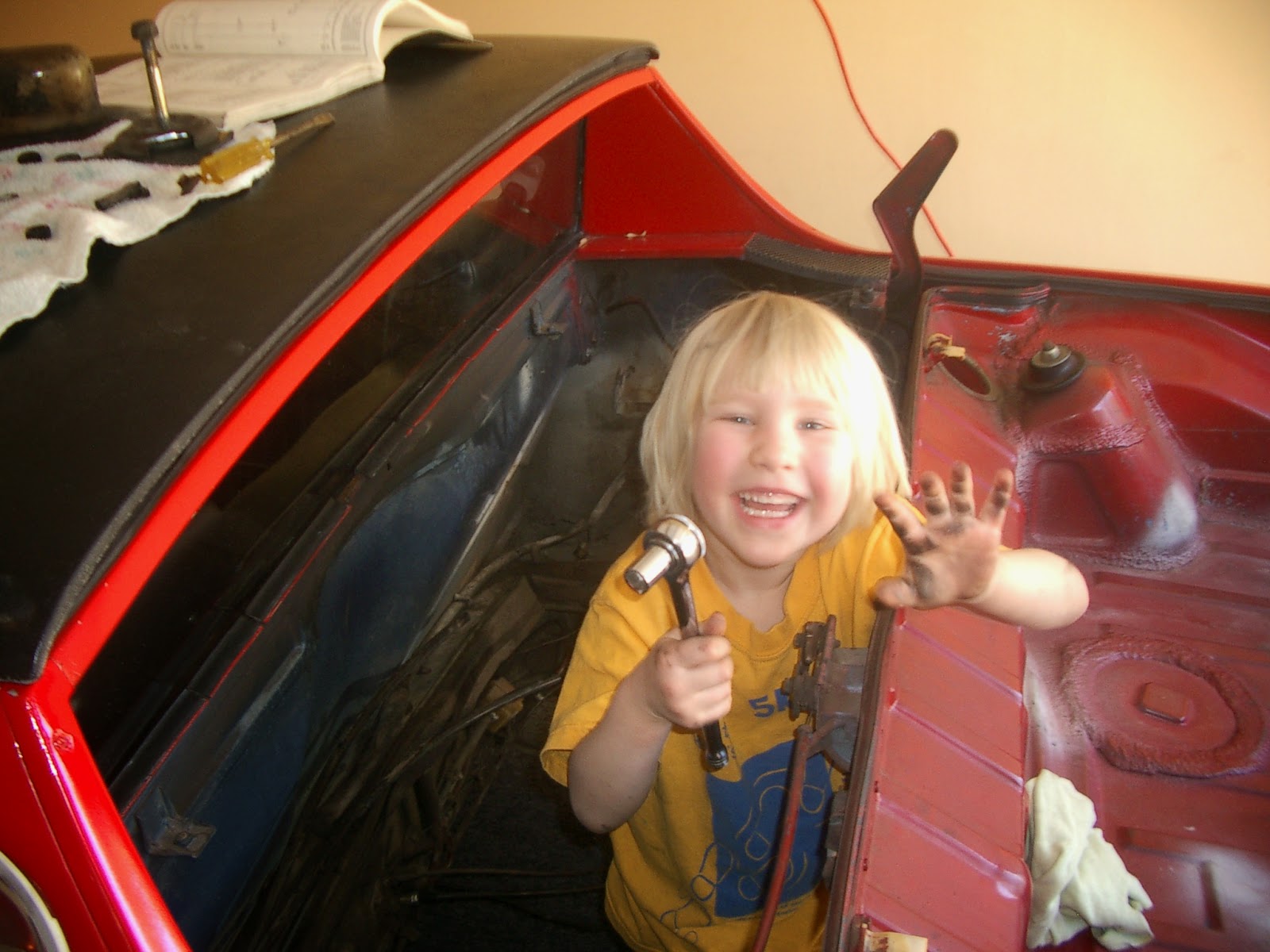 I pulled the engine on Feb 1, 2009. After three months of working evenings after my family went to bed and most weekends (roughly 300-400 hours in total), I drove the electric car out of the driveway on April 30, 2009.

I put over 12,000 electric miles on the car over the next couple of years until the original lead acid batteries would no longer hold a charge. They were messy. They were heavy. I couldn't stomach replacing them with the same bulky, outmoded blocks of lead from which emanated corrosive fluids. Lithium was the new technology, lighter and more efficient, with the promise of longer life. Lithium was also more  expensive. Way more expensive. I couldn't afford Lithium batteries. And so the car has sat ... until now.
Posted by Dave Hale at 8:00 PM 1 comment: